Around 62 million hectares of land are used in Brazil only for agricultural purposes, which represent more than 10% of the national income. A nation that is a leading world producer in products such as coffee, sugar cane, and soy means that the demand for fertilizers is as big as the rural market.

According to a research conducted by the Food and Agriculture Organization of the United Nations in 2004, the use of fertilizers in Brazil increased by 4.4 times, accompanying the growth of the national agricultural production, which increased by 3.4 times from 1970 to 2001. The text goes on to explain how the application of the fertilizers in Brazil is not efficient, as farmers could be producing much higher yields, since other modernized nations are able to produce more while using a lesser amount of fertilizing agents. Numbers are not enough to explain the exact scenario of the effect and dependence of farmers on the product, since the Northeastern region is extremely poor and doesn’t have access to most technologies and fertilizers. This fact helps explain that farmers in such conditions will never be able to produce such high yields. Also, the statistic comparing the agricultural production with the use of fertilizers is actually a generalization of the entire country, since some regions farm without the use of fertilizers. On the other hand, the excess use of fertilizers in other regions means that this technique that is not being applied correctly is actually gradually depleting the minerals in the soil, and Brazil will become more dependent on such products while destroying its own source of agricultural goods.

The Use of Fertilizers 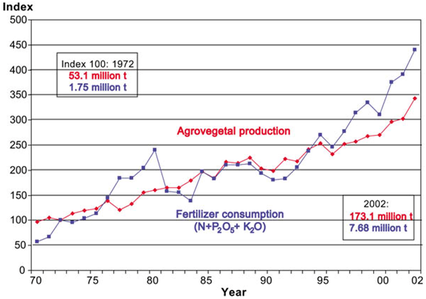 As shown by the graph, phosphate minerals are the most widely used fertilizers in Brazil. This fertilizer is very effective because it provides the soil with several elements that are essential for a plant’s successful growth. The main elements it supplies are nitrogen, phosphorus, potassium, calcium, sulfur and magnesium. Phosphate rocks are also called phosphorite and may come in the molecular formula of Ca5(PO4)3F (CFA) or Ca5(PO4)3OH. This fertilizer is one of the most expensive ones, because of its costly treatment. However, it is still the most used one because farmers use better fertilizers for expensive products that have a high exporting market value and are massively exported, and ergo can’t risk large amounts of crops. The negative side of this fertilizer is that it is a water pollutant, since it encourages the excessive growth of algae. The problem with this is it will eventually die and require a lot of oxygen to decompose, increasing the Biological Oxygen Demand (BOD) of the organisms in the body of water, and leaving other plants and animals with difficulty in finding an oxygen source -- a process called Eutrophication. The table below shows how the soil in the Northeast requires a lot of fertilization, even though its yield is very low; this phenomenon is due to the low degree of weathering and the high amounts of sodium in the soil acting as an obstacle for the growth of plants.

Domestic production of fertilizers began around the 1940s, when only phosphate minerals were produced to aid farmers in their quest for a greater profit. As the demand expanded due to the increased foreign interest, companies started to adopt Western ways of fertilizing the soil, using ammonia, nitric acid, ammonium nitrate, calcium ammonium nitrate on the plants. This historical background demonstrates Brazil’s late start in using fertilizers, meaning it might take longer than other nations to have its soil completely degraded. The following graph will also demonstrate the evolution of fertilizers used in Brazilian soils and allow a visual demonstration of the dominant fertilizers nowadays. 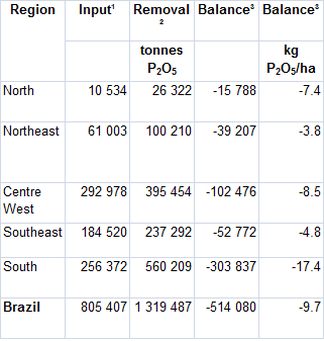 The use of fertilizers in Brazil is still undergoing a process of development, since statistics and professional opinions show farmers  do not know how to apply the aforementioned chemicals to the soil. The yield in Brazilian agriculture, in relation to the amount of fertilizers used, is very low. Thus, the soil is not only being stuffed with excess elements, but money is also being thrown away. Throughout Brazilian history, Phosphorite has been the main fertilizer used for its high efficiency in supplying the earth with needed elements, despite its elevated cost. Brazilian agriculture is gradually degrading its soil by not investing in farming support to less informed people, especially regarding those in the Northeast.

(2) The amounts of nutrient removed with the products of the 16 major crops.

(3) The balance (negative or positive) in terms of tonnes and of kg nutrient/ha.