Fertilizers are used in lettuce plantation to encourage growth and to maximize lettuce leaf production. A fertilizer of good quality is one with equal parts of nitrogen, potassium and phosphate.

The most common one is the 10-10-10 granular fertilizer (10 percent of each substance), and it is spread at a rate of 4 pounds per 100 square feet of garden. It is scattered on the ground around the plants before it is planted and while it is growing. Another commonly used 10-10-10 fertilizer is a soluble version, which is added to the water used to irrigate the crop.

The fertilizer grade includes three numbers -- representing the concentration of nitrogen, phosphate and potash. Depending on a person’s soil (it has to be tested), one might want to use a fertilizer with a higher concentration of one of the 3 macronutrients, such as ammonium nitrate(33.4-0-0), sodium nitrate (16-0-0), or phosphorus (0-46-0). Untested soils generally opt for a 5-10-10 fertilizer. 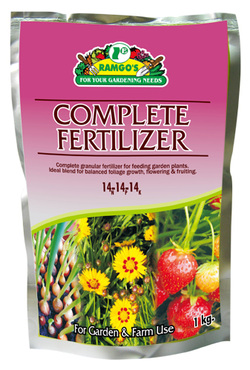 Organic fertilizers contain a minimum percentage of total nitrogen, but only a small percentage of available phosphate and soluble potash, meaning it has to be mixed with other organic compounds for maximum efficiency, thus making it take longer to produce. Most of the times, actually, the NPK of the organic fertilizers doesn’t get counted on the label and make it not qualify as a fertilizer.

A complete fertilizer is composed only of those three main nutrients, which most of the times isn’t enough, as plants need more than 70 different nutrients (a small amount of each). It can also be as damaging to the soil as pesticides, as they can undergo a chemical reaction in the soil, producing acids with a pH lower than 1.2 and bases with a pH greater than 11, which are extremely toxic to the plants.

The salts in chemical fertilizers also destroy the cell walls of microbes, which eventually kill them. The oxygen produced as part of a chemical reaction between the fertilizer and the soil burns up organic matter and is extremely detrimental to any living species there. Mainly composed of nitrogen, phosphorus and potassium, chemical fertilizers lack dozens of other nutrients needed to create a stable soil environment, and include sewage sludge and toxic metals that are also harmful to the crops.

For solids with a pH between 6.0 and 6.7, a balanced 10-10-10 fertilizer is normally used. Lettuce grows best in an environment that is high on Nitrogen, so using a Nitrogen baised fertilizer is ideal for an increased production. Blood meal is the strongest option for Nitrogen-based fertilizers as it also has a high iron content. Because of its great Nitrogen to weight and size ration, people normally choose blood meal as their only option.

However, if a person builds organic soil amendments, no fertilizing is necessary, as most nutrients will already be implemented into the soil. Concluding, chemical fertilizers, while adding certain nutrients to the plants, include hazards to both human and plants. Organic nutrients, on the other side, have more of the essential nutrients to plants, but take an awful amount of extra time to be produced.