How do humans get affected by Fertilizers?

The toxic chemicals found in fertilizers can be absorbed into the plants and enter the food chain via vegetables and cereals. However, the largest health risk is when the chemicals flow into ground water, which is then extracted for drinking.

Benefits and Consequences of Organic and Non-Organic Foods

The term “organic” refers to the way agricultural products are grown and processed. Organic crops must be grown in safe soil, have no modifications, and must remain separate from conventional products. Farmers are not allowed to use synthetic pesticides, bioengineered genes (GMOs), petroleum-based fertilizers, and sewage sludge-based fertilizers.

Organic foods provide a variety of benefits. Some studies show that organic foods have more beneficial nutrients, such as antioxidants, than their conventionally grown counterparts. In addition, people with allergies to foods, chemicals, or preservatives often find their symptoms lessen or go away when they eat only organic foods

Inorganic Foods use synthetics during the production process. These synthetics commonly include chemical fertilizers and pesticides. Additionally, producers can also modify inorganic food items at a molecular or genetic level. 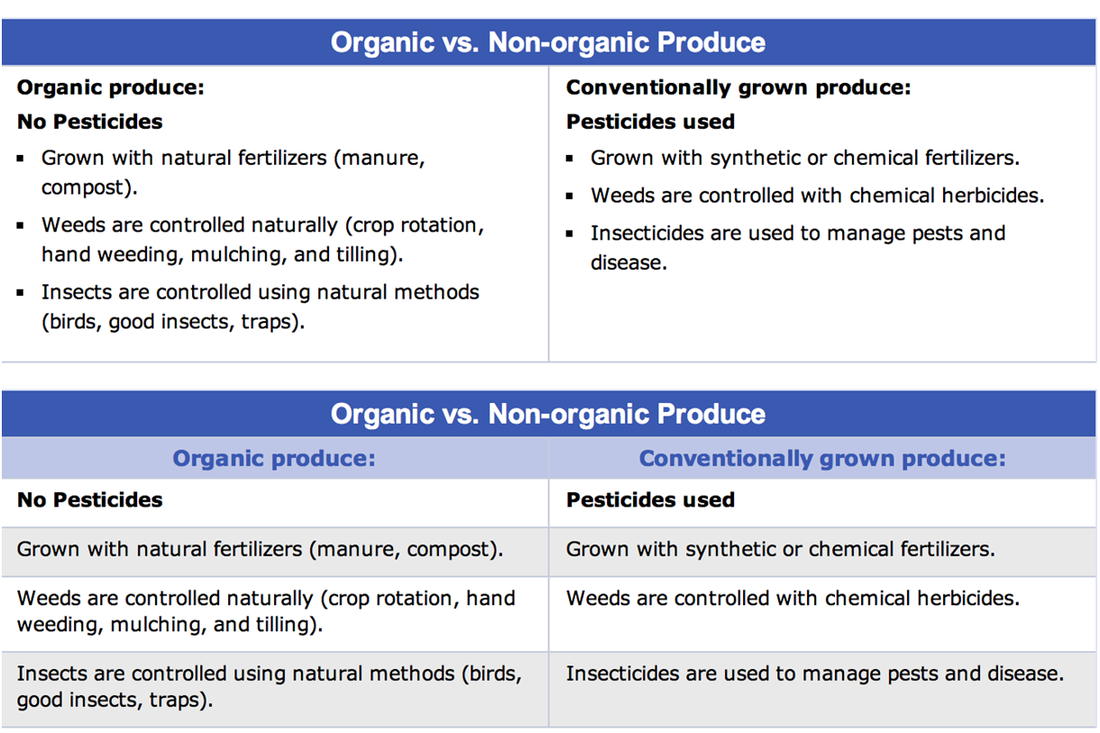 How Fertilizers Affect our Health

Fertilizers are a mixture of toxic chemicals which are absorbed into the plants, leading toxins to enter the food chain via vegetables and cereals and water creating health affects increase and spread rapidly

-         Heavy metals such as Mercury, Lead, Cadmium and Uranium have been found in fertilizers, which can cause disturbances in the kidneys, lungs and liver and cause cancer . Over 29 popular fertilizers tested positive for 22 toxic heavy metals, including Silver, Nickel, Selenium, Thallium and Vanadium, all directly linked to human health hazards.

-        Ammonium Nitrate exposure cause other health problems such as eye and skin irritation, producing a burning sensation. Inhalation exposure can result in irritation of the nose, throat, and lungs. One can also experience nausea, vomiting, flushing of the face and neck, headache, nervousness, uncontrolled muscle movements, faintness and collapse.

-         Potassium Chloride interferes with nerve impulses, and interrupts with virtually all bodily functions and mainly affects heart functioning. It can cause all kinds of gastric and stomach pains, dizziness, bloody diarrhea, convulsions, headaches, mental impairments, redness or itching of the skin or eyes.

-         Cadmium : Ultimately enters the human tissues resulting in diseases such as tracheo-bronchitis, pneumonitis, pulmonary edema, renal failure, osteoporosis, and many others. Lettuce (Latuca sativa L.), found in great quantities in countries like Brazil and others in South America, uptake Cd very easily, with an average amount of 870mg Cd/Kg. Yet, human beings, via the gastrointestinal system, only uptake about 5% of the Cd through food. However, those lacking iron can uptake up to 6% more. Hence, this can be harmful to them because Cadmium poisoning, which comes from its excessive intake, can lead to kidney, bone and pulmonary damage. The “Itai-Itai” (it hurts-it hurts, in Japanese) , discovered in Japan in the year of 1912, is caused by Cadmium poisoning, which results in acute pain in the joints and spine

-         Methemoglobinemia  is a blood disorder in which an abnormal amount of methemoglobin, a form of hemoglobin, is produced. Methemoglobin is produced instead of the essential hemoglobin, responsible for delivering Oxygen to the red blood cells. This causes a difficulty in delivering sufficient Oxygen to all body tissues, and is linked to birth and development disorders, such as the "Blue Baby Syndrome".


Depending on the amount of fertilizer consumed, it may cause disturbances of the kidneys, lungs and liver and even cause cancer. This is due to the toxic metals that fertilizers have. Fertilizers remove the nutrients of the soil, damaging the soil and the local environment. Fertilizers, after being mixed with the soil, gradually reduce the fertility of the soil.